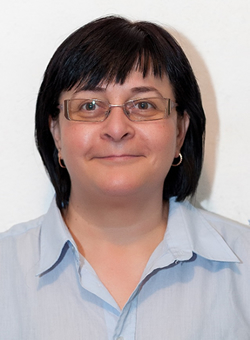 Biography: Dr. Gabriela Mogos received Ph.D. in Informatics at Alexandru Ioan Cuza University of Iasi, Romania.
She received a postdoctoral fellowship at University of Oradea, Romania. Currently she is a Foreign expert at Computer Science Department, Hunan University of Arts and Science, Changde, China.
Her interests and research activities over the past ten years have mainly centred around a quantum cryptography, with an emphasis on design of new quantum algorithms and quantum cryptographic protocols. Also, her interest was directed in embedding the quantum-safe equipment in large networks, simultaneously with the development of the software applications, to be able to replace gradually the existing classical equipment which become vulnerable.
Dr. Mogos has over 40 publications, 3 books, and, has acted as principal investigator and co-investigator in international and national research projects.

Abstract: Quantum cryptography and especially Quantum Key Distribution has triggered intense and prolific research works during the past twenty years and now progresses to maturity. The essential interest of Quantum Key Distribution, that is intrinsically linked to the “quantumness” of the signals exchanged on the quantum channel, is that any eavesdropping, on the line can be detected. This property leads to cryptographic properties that cannot be obtained by classical techniques; this property allows to perform Key Establishment with an extremely high security standard which is known as unconditional or information-theoretic security.
This keynote presentation will explore Quantum cryptography in the 21st century and discuss its key concepts, opportunities and challenges based on experience and perspective.

Biography: Dr. Peng-Sheng Wei received Ph.D. in Mechanical Engineering Department at University of California, Davis, in 1984. He has been a professor in the Department of Mechanical and Electro-Mechanical Engineering of National Sun Yat-Sen University, Kaohsiung, Taiwan, since 1989. Dr. Wei has contributed to advancing the understanding of and to the applications of electron and laser beam, plasma, and resistance welding through theoretical analyses coupled with verification experiments. Investigations also include studies of their thermal and fluid flow processes, and formations of the defects such as humping, rippling, spiking and porosity. Dr. Wei has published more than 80 journal papers, and delivered more than 90 times of Keynote or Invited Speeches in international conferences. He is a Fellow of AWS (2007), and a Fellow of ASME (2000). He also received the Outstanding Research Achievement Awards from both the National Science Council (2004), and NSYSU (1991, 2001, 2004), the Outstanding Scholar Research Project Winner Award from National Science Council (2008), the Adams Memorial Membership Award from AWS (2008), the Warren F. Savage Memorial Award from AWS (2012), and the William Irrgang Memorial Award from AWS (2014). He has been the Xi-Wan Chair Professor of NSYSU since 2009, and Invited Distinguished Professor in the Beijing University of Technology, China, during 2015-2017.

Abstract: Controlling states and growths of a tiny bubble (or a pendant drop) in a static liquid on a solid surface or orifice can be achieved by introducing general dimensionless phase diagrams by applying singular perturbation solutions with small Bond number of the Young-Laplace equation in the literature. Pore formation and its shape in solid influence not only microstructure of materials, but also contemporary issues of various sciences of biology, engineering, foods, geophysics and climate change, etc. In order to remove and control porosity, understanding its formation is important. This work parametrically presents general three-dimensional phase diagrams to describe development of the pore shape. The phase diagrams are found to be divided into three regions, depending on if the bubble surface contains an inflection point or neck. The general growth, departure and entrapment of a bubble thus can be described by path lines on diagrams by adjusting two of three dimensionless parameters governing the apex and base radii, and contact angle. Validity of this model is confirmed by comparing with available theoretical data, agreed with experimental results in the literature.